Including Sumudi Suraweera and the Rupathilaka family, initially the ensemble formed as a collaborative Septet, involving the musicianship of three New Zealanders, Reuben Derrick on saxophones, Misha Marks on guitar and Isaac Smith on double bass.

Since the ensemble’s inception in 2009, the personnel has undergone several reformations, most notably in 2014, a quintet formed which saw, along with Prasanna and Susantha Rupathilaka, Sumudi Suraweera and Isaac Smith, the inclusion of Eshantha Peiris on Piano.

Prasanna Rupathilaka (born in 1972), is a rare exponent of Sri Lankan traditional drumming, as he is equally experienced and established in both the contemporary music scene as well as the Sri Lankan upcountry and low country ritual forms.
His ritual experience began from the age of fifteen, when he started accompanying his father. His experience as a contemporary musician began in 1989 when he worked as an artist for the International Peace Council of Sri Lanka. Prasanna has a collaborative nature and this is evident from his career; he has designed and built a drum which has Sri Lankan and Japanese influences, performed at the WOMAD Festivals in Singapore and Sri Lanka, and conducted a drum orchestra of 350 drummers, which was commissioned by the International Cricket Council. Currently Prasanna is a member of the Sri Lankan State Dance Ensemble and is a respected teacher in both Kandyan and Low Country Drumming forms.

Susantha Rupathilaka (born in 1970) is also a well established traditional artist in Sri Lanka. Susantha, too, was exposed to ritual performances at a young age, where most of his learning occurred through his father and grandfather. Like Prasanna, Susantha has also been a member of the State Dance Ensemble. Susantha is currently the only permanent musician in the area of traditional music at the Sri Lanka Broadcasting Cooperation. His collaborative nature is also apparent throughout his career, having performed with a number of leading dance ensembles and artists in Sri Lanka, most notably the Chithrasena Dance Ensemble, Budhawatta Dance Ensemble, Ravibandu Vidyapathi and Panibaratha.

Reuben Derrick is a saxophonist, clarinettist and composer. His Doctor of Musical Arts research ‘Acoustic illuminations: recorded space as soundscape composition’ (University of Canterbury 2014) draws upon field recording and improvisation. This work featured soundscapes in New Zealand, Australia and Sri Lanka. Reuben’s ongoing projects include free-jazz collective ‘Poltroon’, Hot Club style group ‘Swing 42’, sound design and music for theatre and film, as well as multi-disciplinary collaboration with dance, sculpture, circo-arts, poetry. He is a member of the Cantabrian Society of Sonic Artists for which he hosts visiting artists and facilitates experimental music events. Recently Reuben performed at The Nowhere Festival (Auckland, 2018) and at the Music Matters Festival (Colombo, 2016) with Sri Lankan folk musicians and other international artists. He was awarded a fellowship to the Music Omi residency (New York, 2015), where he collaborated with 13 other musicians from around the world. 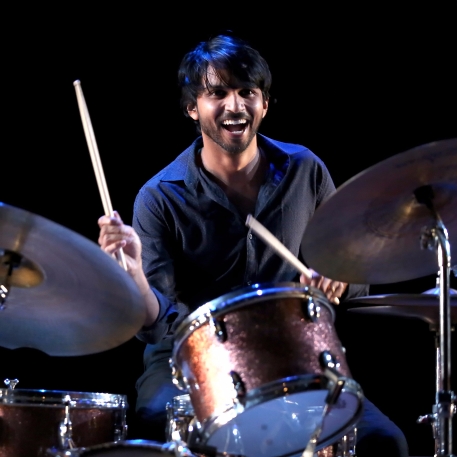 Sumudi Suraweera attained his doctorate in Ethnomusicology in 2010 from the University of Canterbury in New Zealand. His research focused on Sri Lankan Low-Country traditional drumming. Prior to this, in 2005, he completed a Bachelor of Music in jazz, majoring in drums, with first-class honours. In his own ensembles Sumudi leans his focus on experimentation with Sri Lankan traditional musical material. Aside from the Baliphonics, he has initiated a number of other collaborative groups including the Serendib Sorcerers and the Musicmatters Transcoastal Collective.